Even though it is a little colder outside, that famous groundhog in Pennsylvania did not see his shadow, so spring surely is right around the corner!  Phew!  After last years winter it is nice to have a break from piles of snow.  Did you notice I don't have my facts straight?  Hmmnnn...maybe I do...


According to Stormfax.com,  Phil is accurate 39 percent of the time.
Due to the unusually warm winter we've been having, hopefully he'll be wrong this year.
According to the Weather Channel's website,  63 percent of the country was covered in snow last year. Unless a giant blizzard pops up in the near future, the U.S. won't even come close this year – barely 25 percent of the country is covered in snow. Alaska, Seattle and Midland Texas are above average, but ski resorts around the country are making their own snow because their slopes are bare, and in the upper plains, the snow is needed to ward off drought conditions.
Back to West Hartford,
On for today at The Canterbury:

Ride to the grocery store, multi-cultural hour, chair exercises, and we are crocheting hats for kids who have Cancer.

We do have a few more colder days before spring arrives, so don't forget your coat.  Did you know your hands and head lose much of the heat from your body?  So keep them covered and you wont feel the cold as much.

I just asked someone what he was grateful for and I realized that I am grateful for being the hub here at The Canterbury.  We all need somewhere safe to "land", and we usually call that place home.

The office is an integral part of this home, it is the hub, the safe place to land.

I am lucky to be able to help and be here for our residents.  It is an honor and a privilege.

With whom or where is your safe place to land?

It is a beautiful day today, this first day of February!  I hope you readers get outside and breathe the fresh air.

Get ready for Valentine's Day - one resident suggested we make that hug everybody day, "and instill in each other that we all love one another".

I couldn't have said it better myself!

I wish you all a wonderful month full of love! 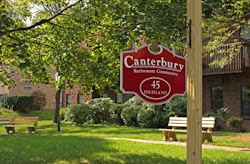 Emily from the Canterbury
West Hartford, Connecticut, United States
Friendliness and a tight-knit social community are what define us. We are an accommodating 55 and over retirement community for people with independent lifestyles. Amazing residents and caring staff combine to create an atmosphere of camaraderie that persists throughout the years. The Canterbury has created a retirement lifestyle of tranquil comfort and choices. We are designed with all the amenities to make your life carefree and secure. You can enjoy a well-deserved style of living, free from the burden of home maintenance and without the loss of independence and privacy. Living at the Canterbury is satisfying because we have given thoughtful consideration to all of the details that go into the ideal home which makes retirement comfortable and secure.